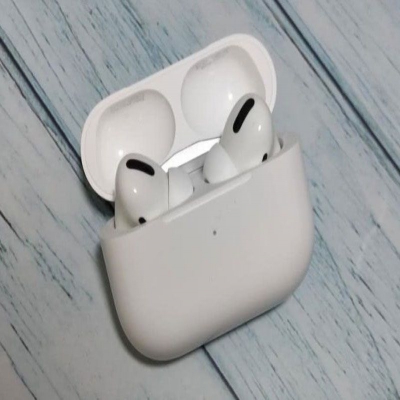 Bluetooth headsets provide a safe and cordless way to send and receive calls and perform voice transmission. Especially when the user is inconvenient to hold the mobile phone, this method is particula

Bluetooth headsets provide a safe and cordless way to send and receive calls and perform voice transmission. Especially when the user is inconvenient to hold the mobile phone, this method is particularly convenient. The user of the Bluetooth headset can move freely within the range where the connection can be maintained, and can communicate with a variety of devices, and is widely used.

This article is based on the CSR Blue Core5Multi2MediaExternal (CSRBC52MME) embedded system, and carries on the design research and realization of the Bluetooth headset. CSR is the world’s leading supplier of Bluetooth technology. Its Blue Core5 embedded platform has a high-performance on-chip DSP. It is the only Bluetooth platform that can support third-party audio enhancement software. It can provide excellent sound quality and best-in-class information. The noise ratio reaches -90dB, and it is the industry leader in power consumption and radio design. It is currently the preferred development platform for headset products. Through the 2.4GHz short-distance radio frequency wireless communication technology in the ISM band, short-distance, low-cost wireless connections are used instead of cable connections. Bluetooth technology provides a unified connection for existing data networks and small peripheral device interfaces. The Bluetooth headset follows the Bluetooth headset specification and hands-free specification defined by the Bluetooth SIG organization, and realizes the wireless communication between the headset and the audio gateway. 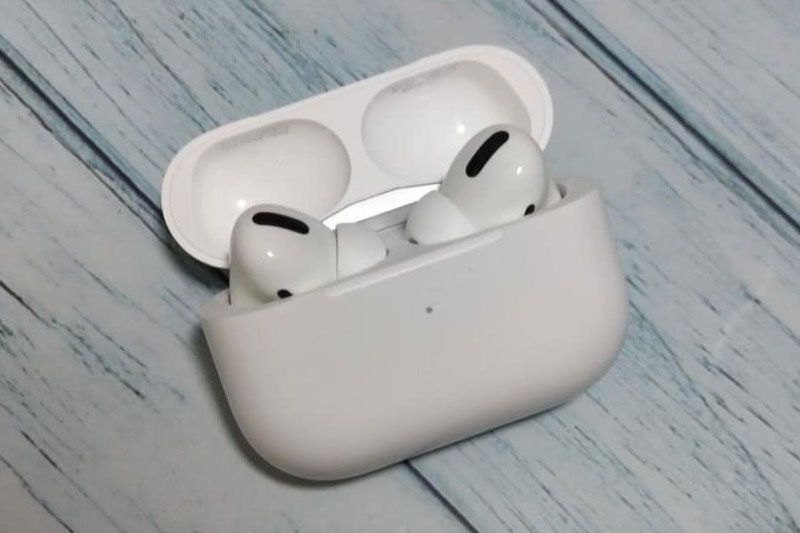 The system design is a mid-to-high-end Bluetooth headset product with single-channel dual-microphone noise reduction processing. It has a separate power switch, 1 multi-function button and 1 3-color LED light. It uses CSR's Blue Core5Multimedia chip with external FLASH memory. , Use the CSR Blue Lab headset software development system to support integrated speech synthesis, that is, text-to-speech (TTS) function, and speech recognition function. It is highly customizable and flexible in function, and there are different packaging options for selection , There is a dedicated DSP audio noise cancellation processor and a wealth of peripheral interfaces such as I2C, USB, UART, PCM/I2S/SPDIF and other interfaces. The block diagram of the Bluetooth headset hardware module is shown in Figure 1. The main features of the BC52MME platform:

(1) The 16b MCU has a speed of 100MHz and can support up to 32Mb external FLASH and 48kB internal RAM. (2) Ultra-low power consumption Kalimba DSP coprocessor, 64MIPS, can integrate third-party software, and provide high-quality audio processing such as noise cancellation. (3) Dual-channel 16bADC and DAC processing, support dual MIC and dual SPK, can achieve stereo audio. (4) It has rich interfaces such as UART, USB, SPI, PCM, I2S/SPDIF, which can realize connection and communication with external devices. (5) There are 2 dedicated LED interfaces, which can realize the flicker effect of fade in and fade out.

Second, the software platform of the Bluetooth headset 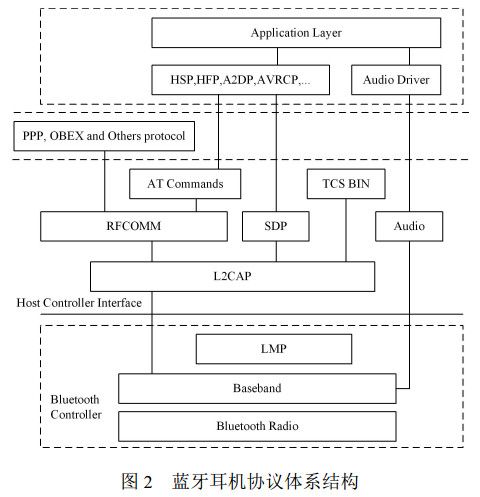 In the Blue Core embedded development environment, on the one hand, you can configure the corresponding project compilation and development environment to facilitate software debugging; on the other hand, you can use the Bluetooth protocol library and part of the source code, that is, the Blue Core firmware and some Bluetooth protocol files, such as Shown in Figure 3. Based on the embedded software layered structure, you only need to focus on the development and implementation of the application profile. In Figure 3: 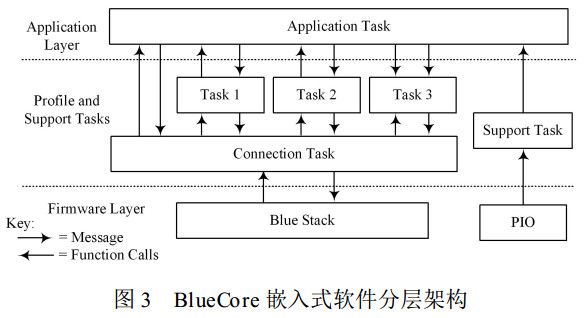 (1) Task: Each Task corresponds to 1 task, which corresponds to 1 basic block, and multiple blocks form an application. Each task completes the interface connection between the application and Blue Core firm ware and is responsible for the corresponding function. Each task has a message processing function and corresponding task state structure. All tasks are run in a single process, and multiple tasks are not allowed to be processed in parallel.

(2) Message: Message is to complete the information transfer between tasks. Its parameter form and meaning are as follows: Task t: Identify the destination address of the message, which is the pointer of the receiving task; Message Id id: The label of the message, when the task receives the message Used to identify and call the corresponding function function; Message pay load: The load of the message should include the required state data, so that the processing function can be processed correctly. The memory of the payload must be released after the message is delivered. The payload content is optional and can be set to Null. After the message is sent, all messages must enter the message FIFO queue for queuing and forwarding processing. The Message Loop function controls the main scheduling loop and processes the dispatch task messages; each dispatch checks the first message in the queue and dispatches it to the corresponding task. The call location is shown in the pseudo code section in Section 3.3.

(2) I/O output management tasks: ①Initialize the task, apply for the task memory and initialize variables and the message processing function of the task; ②Initialize the configuration output I/O port, initialize according to the I/O output attribute table; ③I/ O output management, including PIO and dedicated LED ports, is handled in the task processing function according to the LED flashing mode and timing requirements.

Different functions are distinguished by task, which is easy to understand, flexible and expandable. Task modules can be added or shielded by task module. Each task can realize the communication between each task through Blue Core's FIFO message mechanism, so as to realize the Bluetooth headset function, as shown in Figure 4. 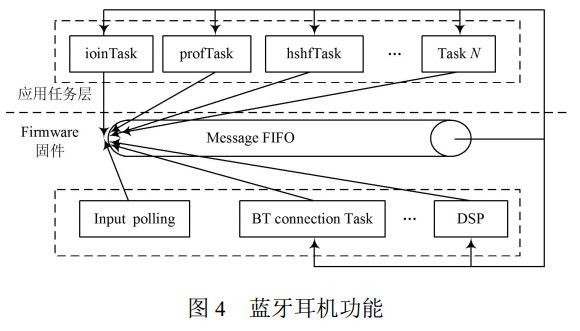 The VREGENABLEH pin on the BC52MMExt chip can be compatible with a maximum voltage of 4.9V. When the pin is pulled up by a high-level pulse for 2s, the Firmware runs and locks the pull-up internally. After that, the pin can be used as an input pin. After the firmware startup is complete, the VM virtual machine is run, which provides a running environment for the Application Task.

After the headset is initialized, the headset first enters the pairing mode (pai2ringmodeorinquiryscanmode), AG (audio gateway) queries (inquiry mode) the current pairable devices, and the password authentication verification can be performed after the headset device is found. After the authentication is passed, the headset and AG can be Make a service connection (SLC establishment). After that, the Bluetooth headset enters the normal standby mode and can perform related operations such as incoming calls and dialing that comply with the HSP/HFP profile specification. The headset can pass the PTS (front line test system) function test and conform to the communication process of the Bluetooth headset HSP and HFP profile protocol.

Based on the CSR Bluetooth embedded platform design, the Bluetooth headset call function is realized. Through in-depth research on the Blue Core5Multimedia embedded system platform, the platform has the characteristics of high performance, high flexibility, and customization, which is suitable for the development of high-end headset products. The Bluetooth headset products on this platform will surely win the high-end customer market and have important application significance.