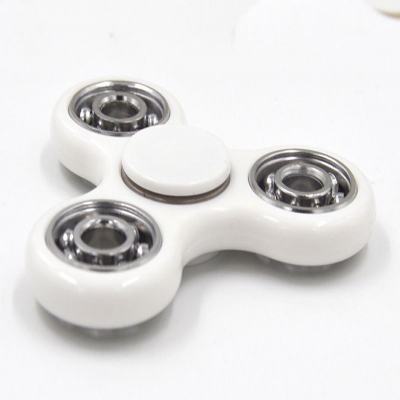 "Fidget Spinner", also known as Fidget Spinner, is a small toy with a bearing symmetrical structure and idling on the fingers. It consists of a two-way or multi-directional symmetric body as

"Fidget Spinner", also known as Fidget Spinner, is a small toy with a bearing symmetrical structure and idling on the fingers. It consists of a two-way or multi-directional symmetric body as the main body, and a bearing is embedded in the middle to form a product that can rotate in a plane. The basic principle is similar to that of a traditional top, but it can be rotated only by flicking with a finger.

1. The role of fingertip spinners and player positioning

The "Fingertip Spinner" game uses emotional design methods, placing the game in the perspective of emotional needs, and attaching the important task of emotional interaction to the product. Starting from emotional needs, analyze and summarize the emotional value of current social games to players, so Better cater to the needs of players, better serve the public and life. In addition, the analysis of emotional design in game products from the perspective of players affirmed the positive use and significance of the "fingertip spinner" game to people and society.

The different shapes and themes of "Fingertip Spinning Top" also cater to different consumer groups. Children prefer the themes of "movies", "cartoons" or "heroes"; most young people like organic shapes or special effects with novel shapes; office workers do Prefer small or metallic shapes. Designers start from consumer groups and design products suitable for all kinds of people, which can not only reflect the identity, hobbies and tastes of users, but also increase the fun and entertainment of game products.

2.1 Factors in the emotional design of fingertip spinning games

(1) Emotional factors at the sensory level: In a fast-paced life, how to make players accept a game product in a short time is a problem that every game designer must face. On the sensory level, the "fingertip top" arouses the player's interest from a multi-dimensional sensory perspective, mainly from the visual, tactile, and auditory three aspects of emotional interaction with the player. Visual factors are composed of various patterns, shapes, and special effects. The significant visual effects produce a sense of substitution and cause emotional resonance between the player and the product. Hearing is mainly manifested in the product attaching corresponding sound effects to specific scenes and themes, which will create a unique emotional experience for players. Tactile is the subjective feeling of the game product that the player touches. The product details designed by the "fingertip spinner" based on ergonomic principles will bring a comfortable experience to the player, and different materials and detailed processing will produce completely different emotional experiences. The spiral leaf of the product itself is a part that can be decorated, and the materials and textures are diverse. These detailed treatments will give players a special tactile experience and give players full emotional support psychologically.

(2) Emotional factors at the behavioral level: At present, single-player game products are mainly used in the handheld game market. Now, as the opportunities for communication between people become less and less, games have become interpersonal maintenance The "new bond" of the relationship, and the "fingertip spinning top" stands out in this environment. First of all, it has its own interactivity, including collaboration and competition. Cooperation means that players cooperate with each other to achieve the same goal. Competition can stimulate the player's subconscious desire to win and lose, so that players can obtain a sense of identity and accomplishment.

2.2 Strategies for the emotional design of fingertip spinner games

(1) Personalization: In the diversified game market, each game wants to gain a dominant position in the competition of the industry, and designers need to launch personalized products based on player's personality preferences, behavior habits, and operating modes. In the past, handheld games expressed individuality in a single way. The "Fingertip Spinner" not only uses traditional engraving on the decoration, but also customizes a game product suitable for players of different ages according to the players' personal likes and dislikes. This model achieves the purpose of decoration by designing the appearance of the product and satisfies the "personalized" emotional experience of different players. Therefore, the personalization and exclusiveization of game products is one of the reasons why they are popular with the public.

(2) Serialization: "Fingertip Gyro" has launched serialized products based on market trends, such as character series, alloy series, special-shaped series, etc. Some players who have special requirements for appearance purchase series of products for collection, which invisibly promotes the development of the thematic industry of "fingertip spinning tops". According to the characters in the movie "Captain America", some designers simply change the color of the shield while keeping the shape and pattern unchanged, thus launching the "Captain America" series of "fingertip spinners." 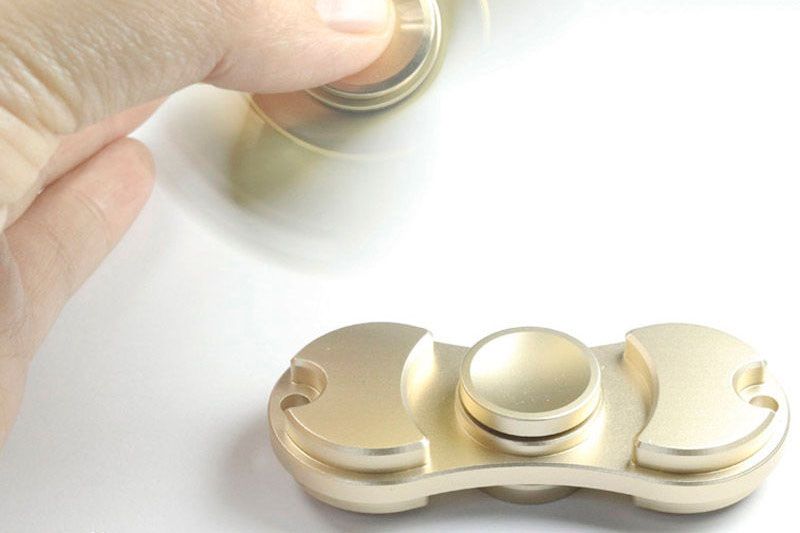 3. The experience and positioning of the emotional design of "fingertip top" game products

Living in the digital media era, games are people's first choice for entertainment and decompression. "Online games", "interactive games" and "online games" occupy the mainstream of the game market, but "handheld games" have not been replaced. "Handheld games" emerge in endlessly, with different forms, except for the "fingertip top" resident on the Internet and real life. Compared with products of the same type, its own characteristics and emotional experience have laid the groundwork for today's popularity.

Nowadays, the relatively novel handheld toys "Yo-Yo", "Buck Ball", "Slimes", "Magnetic Fluid Bottle" and other handheld game products are diversified and complicated, and the "Fingertip Spinner" stands out among similar products with its unique design experience. In order to highlight the difference between the "fingertip spinning top" and similar products, we analyze from the following aspects.

(1) A sense of the times: As a traditional Chinese game, "Gyro" has its own adsorption properties. When the spiral rotates at a high speed, it will attract people to continue to pay attention to its movement. The "finger tip top" changes the shape of the traditional top, such as adding spiral leaves to its shape. In addition to the themes and styling factors, special effects, a unique technological method, have also emerged with the times, allowing players to better immerse themselves.

With the dominance of electronic technology and virtual technology, the handheld game market is increasingly compressed. Similar products in the market are also more diverse, such as decompression games or handheld game consoles. How can they be unique in the complex market? The positioning of the "fingertip spinner" in the design and market is particularly important.

(1) Form positioning: "Fingertip Spinner" can be processed into different shapes (circle, triangle, special shape, etc.) (Figure 2), which is easier to use than the same type of handheld games "Buck Ball" and "Fingertip Spinner" Strong, compact and easy to store. In addition, the more popular game products "Power Sand" and "Slimes" are liquids and gels. They are novel in form but consume manpower and space. They must be cleaned or sealed in time after use. In contrast, "fingertip tops" The ease of use of the form is indeed one of the main advantages of hot sales.

(2) Functional positioning: The lack of functionality must be a failed product. After MD Engineering released the product, many users responded. It can be used to relieve anxiety, reduce ADHD, and even smokers say that it can help quit smoking. “Fingertip top” can appropriately replace “small movements” such as “turning the book”, “turning the pen”, “shaking legs”, “biting nails”, and diverting attention in another way as a way of self-regulation to relieve The effect of anxiety and decompression. Scientific research shows that it is not so magical, but has a relieving effect on anxiety, not a cure. However, all manufacturers now use the slogans of "anxiety disorder artifact" and "obsessive-compulsive disorder artifact", which shows that its role has long been self-evident.

(3) Material positioning: "Fingertip tops" are mostly plastic, bronze or aluminum alloy. The weight of itself is usually about 100 grams, and different materials can be added or embedded, like exclusive accessories, giving full beauty and artistic sense. For example, metal materials are more visually textured and can be used not only by themselves, but also as gifts or collections; children will consider safety issues, and businesses will consider plastic materials as the main material for toys, which is not only lightweight but also safe. For example, the "stainless steel fingertip spinner" (Figure 2) launched by Shenzhen Aitner Technology Co., Ltd. is not only bright in material, but also novel in shape. The spiral leaf is hollowed out, and the hollowed out part is hexagonal, and the overall triangle is used as The geometry appears and can be rotated by one-handed insertion. Develop another way of entertainment for the product, and the distance between each spiral leaf can be used as a "corkscrew" to integrate entertainment, aesthetics and functions.

(4) Value positioning: In the toy market, merchants have launched "animation figures" based on animation and movie characters, which are well-made and highly restored virtual prototypes, and the cost is very high. The "fingertip top" is priced according to workmanship, and the consumer group is no longer single-limited. Products can be selected based on cost performance and personal preferences, and prices vary according to consumers' needs. Because of the particularity of its own form, the product itself has a "decorative area" that can be decorated in the decorative area, more like a toy with culture and technology as the carrier. For example, the products of the "movie series" (see Figure 3), the enduring logos of heroes such as Batman, Spiderman, Transformers, etc. are used as decorative elements by merchants, with unchanged functions and collection value. Consumers start from a single game player. It has expanded to movie fans and fans, and movie fans will buy and even collect. 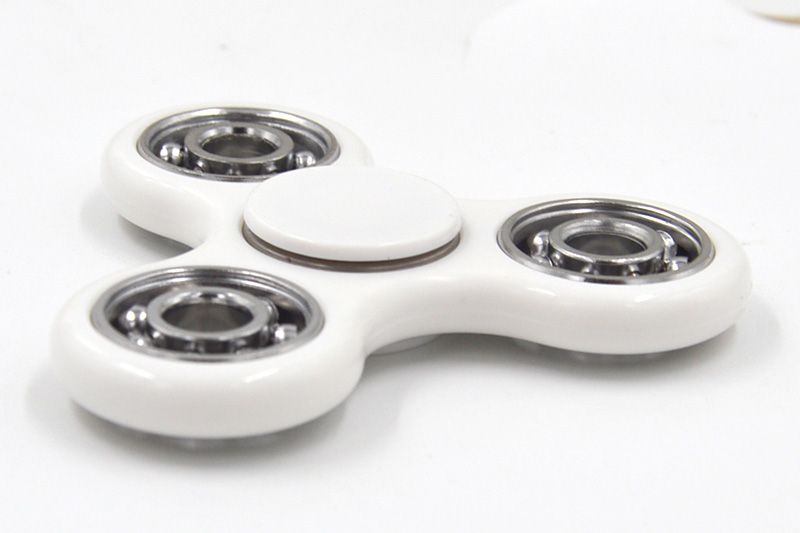 4. The influence and enlightenment of "fingertip spinning top" as a game emotional design

4.1 The influence of "fingertip spinning top" as an emotional design of the game

The world-popular "finger-tip spinner" stands out in the fierce competition of handheld games. A flash of light may be a marketing strategy, and the main reason for its global spread is its own design factors. Innovative shapes, shapes and materials, diverse sports effects and strong plasticity. Each side of the game product has different functions, allowing players to move their fingers: sliding, buttons, fluctuations and rotations, which can carry some anxiety, spiral blades in high-speed motion It will stimulate the player's psychology, and some products come with special lighting effects to produce visual impact. Many young people and even office workers are eager for this. The product can avoid "small movements" on specific occasions, and the silent design also avoids auditory annoyance.

4.2 Enlightenment from the emergence of “fingertip top”

In market competition, in addition to paying attention to the characteristics of the game product itself, but also taking into account the player's emotional experience, emotional design will bring players a real emotional atmosphere and make players feel a sense of belonging. If the emotional design is not appropriate, it will mislead the player. For example, excessive emphasis on "competitiveness" and "victory" to strengthen dependence on the game will induce players to "addiction"; excessive emphasis on "appreciation" and adopting design schemes with potential safety hazards in order to achieve visual impact. It will also pose a "threat" to the safety of users. Therefore, reasonable emotional design is always a problem that designers need to control.

In the game market, designers should rationally inject emotional design into the game itself to make the game the best choice for mass entertainment. Players can have fun during the game and even develop their potential. In the design and development of the "fingertip spinner" handheld game, designers should think about how to enhance the game’s fun and appealing and other emotional factors, express the subtle emotions between the game and the player in emotional language, and let the player feel the game The vitality of the game makes the game better serve the world.